Top 10 Best Goalkeepers In The World

Who are the best goalkeepers in the world? The role of the goalie has evolved, making them even more important in modern soccer. Let’s review who are the best right now.
Journalist
15 min.
Monday, January 16, 2023
/
Updated
6/14/22 10:57 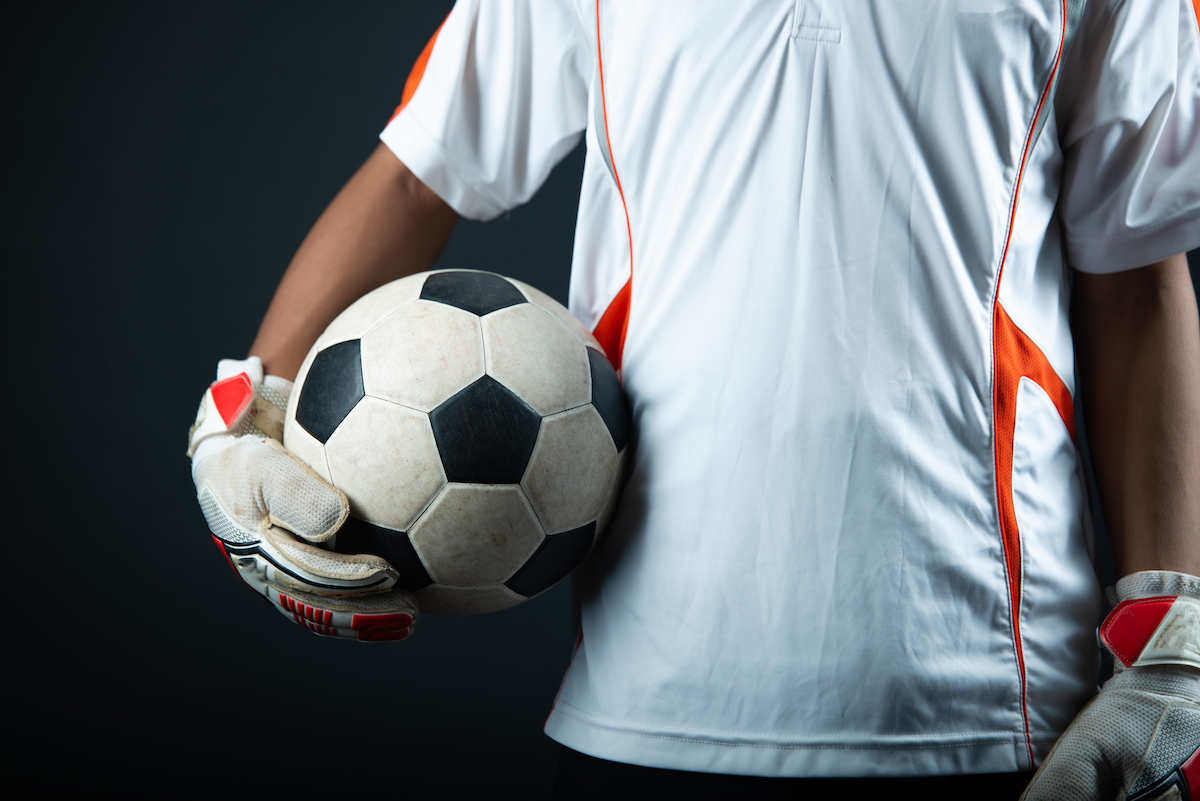 While outfield players usually take much of the limelight, a soccer team cannot succeed without a dependable goalkeeper. Especially nowadays, when their role is more dynamic than ever. Goalkeepers can be game-defining not only with their saves, but also with their contribution in the build-up play, counter attacks and other situations of the game.

Today we bring you a curated list of the current best goalies in the world.

The 10 best goalkeepers in the world

It took some time, but when Aaron Ramsdale had the opportunity to play for one of the Premier League ‘Big Six’ clubs, he seized it. After suffering back-to-back relegations to the English Football League Championship, first with Bournemouth and later with Sheffield United, his career would finally take off when Arsenal signed him in the summer of 2021.

In his first year in North London, the 24-year-old conceded 39 goals in 34 Premier League appearances, keeping 12 clean sheets in the process. His fantastic level in the 2021-22 season not only let the Gunners fight for a UEFA Champions League berth until the very end (although Tottenham eventually finished above them in the standings) but it also earned him a call-up to the England national team, making his international debut in a 10-0 victory against San Marino in the World Cup qualifiers.

Wolverhampton Wanderers found in José Sá the perfect replacement for Rui Patricio. After selling the veteran goalkeeper to AS Roma, Sá proved to Wolves why he was worth every single penny.

Ever since he made his debut with AC Milan at just 16 years of age in 2015, Gianluigi Donnarumma won recognition as one of the best goalkeepers on Earth. It didn’t take long for him to establish himself in the Rossoneri’s senior squad and, eventually, in the Italian national team, filling in the shoes of historic goalie Gianluigi Buffon.

An incredibly mature player for his age, Donnarumma wore the armband at AC Milan for the first time when he was just 21. After helping Italy win the Euro 2020 —coming up clutch in the penalty shootout against England in the final— Donnarumma joined PSG as a free agent in July 2021.

Unlike last year, 2022 hasn’t been great so far for Donnaruma, whose mistake against Real Madrid in the Champions League round of 16 paved the way for the opponent’s comeback. In addition, his performance against Argentina in the Finalissima wasn’t great either. However, the future is still bright for the 23-year-old.

The last few years have not been easy for Manchester United, but if there has been one bright spot, that was David de Gea. The Spanish goalkeeper kept the team afloat more than once, even in 2021-22, a tumultuous season for the Red Devils.

In what has been a rather forgettable year for the team, the 31-year-old was recognized for his performances by being named the Players’ Player of the Year for the fourth time in his career. De Gea started in all 38 Premier League games of the season, recording a 69.5 save percentage.

Manuel Neuer continues to defy Father Time. At 36, the German goalkeeper comes from another fantastic season with Bayern Munich, playing a pivotal role in their 10th consecutive Bundesliga title.

Neuer was a wall for every opponent, conceding just 26 goals in 28 league games while keeping 10 clean sheets. Even though Bayern fell short in their quest for the UEFA Champions League, Neuer had a great tournament by allowing only six goals and recording four clean sheets. With Qatar 2022 looming around, he’s expected to play another FIFA World Cup with Germany.

Alisson Becker is one of the reasons why Liverpool have become such a powerful team in Europe over the last few years. The Reds fought for both the Premier League and Champions League titles until the end last season, and even though they didn’t win any of them, they couldn’t have gone that far without the Brazilian goalkeeper.

The 29-year-old, who also shines on the international level with Brazil, has won a reputation as one of the greatest goalkeepers on the planet from his very first year at Anfield. Since he arrived, Liverpool has won all major titles and ruled in Merseyside over lifelong rivals Everton. Alisson was the joint-leader in clean sheets last season alongside Manchester City goalkeeper Ederson (20). Additionally, he ranked third in save percentage (75.3%).

When we talk about the dynamic role of goalkeepers in the modern era, we have to talk about Ederson Moraes. His ability with the ball at his feet made him a perfect candidate for Pep Guardiola’s plans, given that he always liked goalies who can make great passes and begin the build-up from the team’s own box. Last season, Ederson averaged 25.64 passes per game, which explains how much he contributes to the team’s style of play of possession.

The 28-year-old is one of the best and most dynamic shot-stoppers in the world right now. That’s why Brazil has a hard time choosing between him and Alisson. Ederson helped the Citizens win back-to-back Premier League titles last season, conceding only 26 goals. His save rate (69.9%) was just below Leicester City goalkeeper Kasper Schmeichel’s (71%).

Atlético Madrid’s manager Diego Simeone found in Jan Oblak the goalkeeper he needed to take his team to new heights. El Cholo’s defensive style of play required a reliable guy between the sticks, and Oblak  proved to be the perfect man for the job.

The 29-year-old Slovenian star helped the Colchoneros make deep runs in different UEFA Champions League campaigns, but most importantly, he played a pivotal role in their 11th La Liga title. Oblak had the second best save percentage in the 2020-21 season (80%), keeping 18 clean sheets while allowing just 25 goals in all 38 games of the season.

While the Ligue 1 may have noticed his potential before the rest, world football got to know what a fantastic goalkeeper Edouard Mendy is once he took his talents to the Premier League. In his first year at Chelsea, the Senegal international quickly won the job and lead the Blues to a memorable 2020-21 Champions League title.

With just three goals conceded and nine clean sheets, Mendy deserves a lot of credit for Chelsea’s European success. His dynamic role as a sweeper-keeper is what makes him one of the most interesting players at his position in the modern era. Last season, the 30-year-old ranked fourth in save percentage (73.7%). Besides, Mendy has also shone on the international stage, helping Senegal win the 2021 AFCON and also clinch a FIFA World Cup berth.

Thibaut Courtois established himself as one of the world’s best goalkeepers many years ago, from his days with Atletico Madrid and Chelsea. However, his move to Real Madrid helped him prove why he is the number one at this position.

The 6’ 7’’ Belgian megastar shut down the most prolific strikers in Europe last season, being a key contributor to Real Madrid’s 14th Champions League trophy. On the road to the title, he even stopped a penalty from Lionel Messi. The Merengues’ success in the 2021-22 La Liga also has a lot to do with Courtois’ work, as he ranked second in save rate (76.7%).

While only 10 made the final cut, there are other star goalkeepers in the world who are worth mentioning. Here, let’s take a look at these goalies, who could be among the top 10 in the future (this list is not in order).

Marc-André ter Stegen has been the goalkeeper of Barcelona since 2014, which explains what kind of player we’re talking about. Despite Barça’s struggles last season, the German goalie remains one of the best players in their roster.

Yassine Bounou, often known as Bono, had a breakout season with Sevilla in the 2019-20 campaign, when he helped the club win another UEFA Europa League title. At 31, the 6’ 5’’ Moroccan goalie comes from a fantastic performance in La Liga, ranking first in save percentage (77.6%).

France international Mike Maignan made AC Milan fans forget about the painful departure of Gianluigi Donnarumma. After many years of watching Juventus’ dominance in the Serie A, the Rossoneri ended an 11-year drought by winning the 2021-22 Serie A title. But they couldn’t have done it without Maignan, who kept 17 clean sheets and conceded only 21 times in 32 appearances.

RB Leipzig have made a lot of progress in recent years, but we couldn’t explain it without mentioning Peter Gulacsi. The 32-year-old helped the Bundesliga side make UEFA Champions League appearances, including a trip to the semifinals in 2020.

When we talk about the most underrated goalkeepers in the world, Keylor Navas will probably come to mind. The Costa Rican goalkeeper shone at Real Madrid, but had to make room for Courtois. Later, despite having taken PSG to a Champions League final with his great skill, he had to face competition with Gianluigi Donnarumma. Even so, soccer fans know Navas is a world-class goalkeeper.

While the likes of Lev Yashin, Peter Schmeichel, Iker Casillas, and Gianluigi Buffon will always be remembered as some of the best goalkeepers of all time, these current goalies are making a strong case to join the list in the future.

Watch the greatest sports moments with The Highlights App. Sign up to the waitlist to be the first to know when the app is available.