How Many Red Cards Does Lionel Messi Have?

How many red cards has Lionel Messi collected throughout his career? The 34-year-old PSG and Argentine national team superstar has been red carded three times in total. In this article we will review all the times Messi has been sent off in his career, both with Argentina and with FC Barcelona.
Journalist
9 min.
Monday, January 16, 2023
/
Updated
12/7/22 21:49 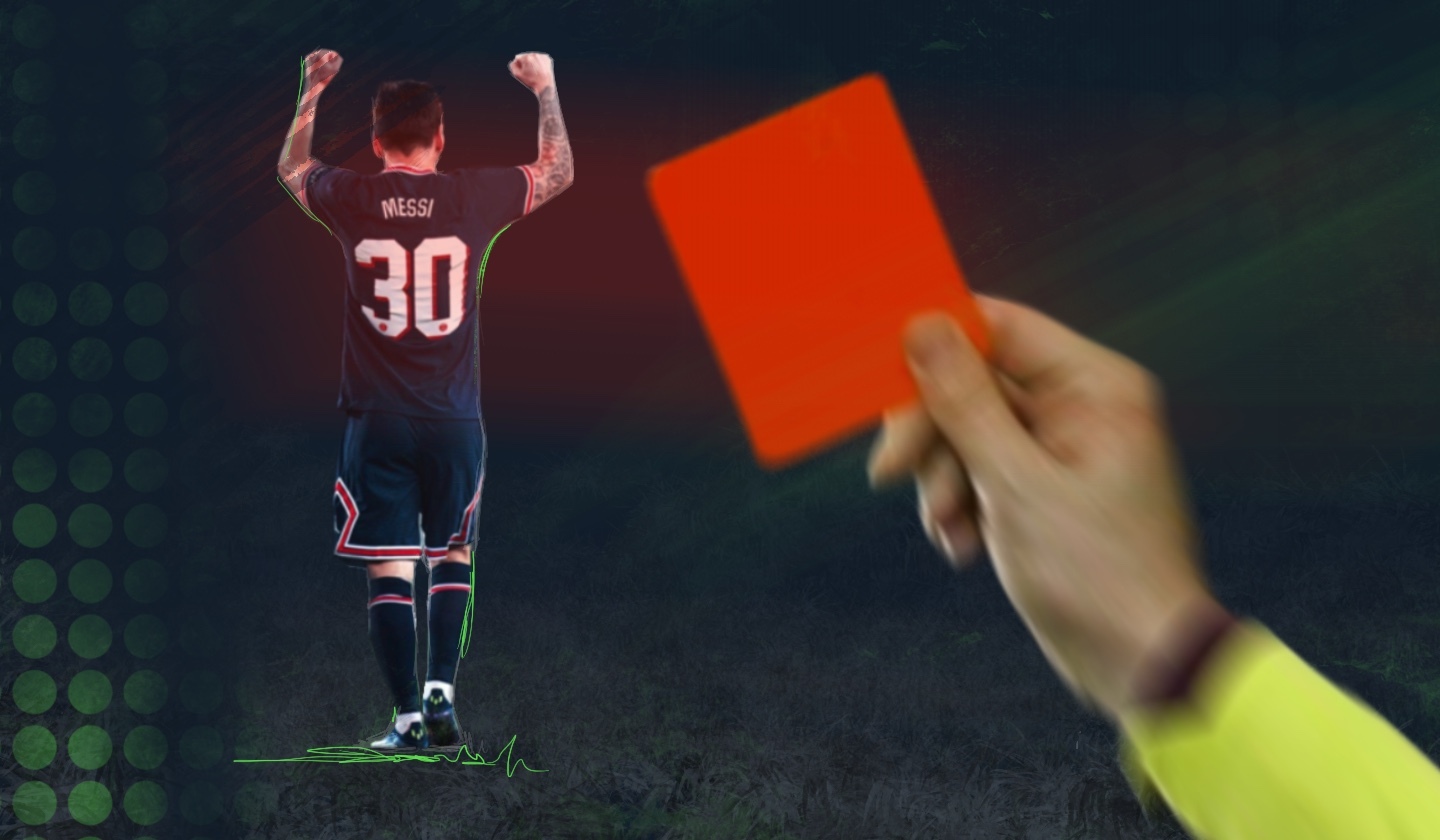 One of the greatest soccer players of all time, Lionel Messi was born in Rosario, Argentina. The 34-year-old seven-time Ballon d'Or winner is known for his incredible dribbling skills and goal-scoring ability. Messi has a total of 692 goals in 841 club matches. What many will not know is that the silky Argentine forward has been sent off three times in his career. Here are the three times Lionel Messi has been red-carded.

How many red cards has Lionel Messi received?

Messi has been red-carded three times in his career, twice with Argentina and once with FC Barcelona. For a player who actually gets kicked an awful lot, Messi has had to endure all sorts of brutality on the pitch. However, the three times he was red-carded made world news. Here is a look back at the times La Pulga, as he is also known, was given his marching orders.

The very first time Lionel Messi saw a red card it was world news. At the time, on August 15th 2005, a 18-year-old Messi was debuting for the Argentine national team for his first cap. José Pékerman sent the Barcelona prodigy onto the field in the 63rd minute of a friendly match against Hungary.

Only two minutes after being subbed on, Lionel Messi touched the ball for the first time. Then his shirt was pulled by Hungarian defender Vilmos Vanczák— the young forward threw an elbow and was shown a straight red card soon after. Reports claimed that the Argentine team found the young Messi weeping in the locker room when the match was over.

The second time Messi was shown a red card it was, again, while playing for Argentina. It happened in the 2019 Copa América against Chile, in the third place match of the tournament held in Brazil. The incident occurred in the 32nd minute of the first half when Messi and Chile’s Gary Medel got into a scuffle.

Messi was chasing down a ball in the Chilean penalty area when Gary Medel chested Messi to try and get him off the ball. Messi and Medel got into a chest bumping match and a verbal altercation when the referee red-carded both of them. Argentina would defeat Chile 2-1 to claim third place in the Copa América; then, in 2021, Argentina would end their international title drought and defeat Brazil in the final giving Messi his first championship with the senior Argentine national team.

The final time Lionel Messi was red-carded was near the end of his time at Barcelona, and playing for ill-fated manager Ronald Koeman. It was the first red card for Messi at the Catalan team, and it was during a Spanish Supercup final match between Barcelona and Athletic Bilbao. Antoine Griezmann gave Barcelona the lead twice in the match but Athletic Bilbao bounced back with a big 90 minute equalizer by Asier Villalibre.

Barcelona was losing to Athletic Bilbao 3-2 in extra time when in the 118th minute Messi came charging down the midfield with the ball when striker Asier Villalibre bumped into the Argentine. Messi retaliated by hitting Villalibre over the head causing him to fall, and when the play was stopped he was shown a straight red card by referee Gil Manzano. Due to his Supercopa suspension Messi had to miss a Copa Del Rey match against Cornella.

You can watch a summary video of Messi's three red cards below ;)

How many yellow cards has Lionel Messi received?

Lionel Messi’s yellow card history breaks down to 81 yellow cards with Barcelona, 8 with Argentina and 1 with PSG. As Messi has gotten older and taken more leading roles on his teams, Messi is talking to the referees more and more and this at times gets him on the officiating teams radar.

Lionel Messi has never been known to be a violent player. During his career in Spain’s La Liga, in France, or with Argentina, Messi has usually been the brunt of opposing defender’s attacks and never a malicious player. It is commendable to see Messi take a hit, get up, and continue to play. Here are some reasons why Messi has such a great track record of discipline on the pitch.

Messi is a striker or withdrawn forward, and most of the time he is attacking the opposing team’s goal. As a result, La Pulga is frequently the brunt of fouls and hard tackles. Even now at PSG, Messi is continuing to get fouled. And at the World Cup, he will most likely once again be a marked man by opposing defenses.

Messi is not known for marking his opponents. Be it at Barça, Paris Saint Germain, or Argentina, Messi never has the task to mark any player. In being kept away from defending, Messi avoids contact with opposing players and therefore does not foul very often.

Unlike Diego Maradona or Cristiano Ronaldo, Messi is known for having a calm and collected temper. It is very rare to see Lionel Messi explode, he is not used to getting yellow or red cards or sending offs, and he avoids verbal confrontation.

In the three times Messi was red-carded in his career, it was mainly because the Argentine superstar was provoked into a red card. The Ballon d’Or winner has kept a clean career on the pitch, letting his goals do all of his talking for him, be it for FC Barcelona at the Camp Nou, Argentina, or now at PSG in France.

Find more interesting facts and information about your favorite players like Lionel Messi and the best clubs and leagues like Barcelona, Chelsea, PSG, or the Premier League by checking out our blog, and catch the best moments in sports! Sign up now, and get on our waiting list to be the first to know when our app is available!