One of the most iconic players of his generation, Ronaldinho Gaúcho has made millions of fans around the world. Here, take a look at the story behind the beloved Brazilian footballer.
Journalist
17 min.
Thursday, August 11, 2022
/
Updated
8/10/22 13:05 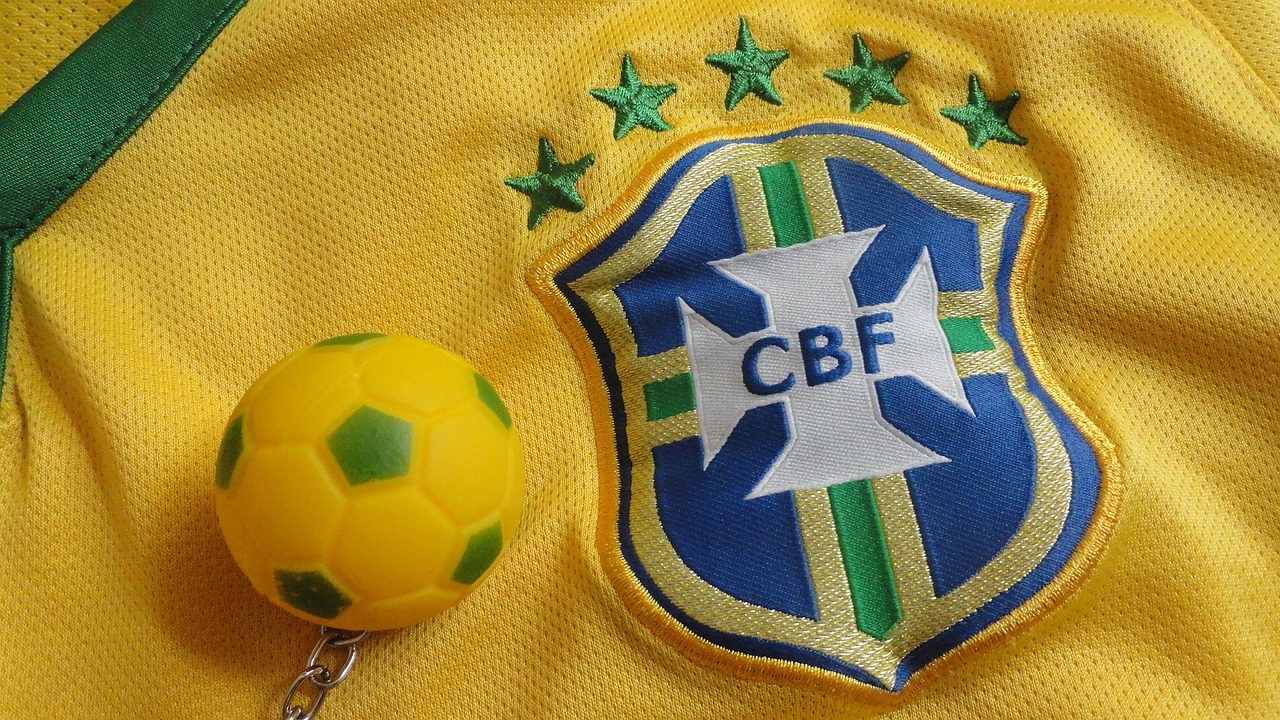 Many soccer players make it to the big stage. Argentine star Lionel Messi, Portuguese forward Cristiano Ronaldo, and so on. But only a few of them get into people’s hearts the way Ronaldinho Gaúcho did. From the streets of Brazil to the most emblematic stadiums on Earth, Dinho had a rollercoaster life and career.

From tasting the ultimate glory with the national team to having a lackluster ending to his brilliant career, the Brazilian playmaker always had a reason to smile, regardless of the moment. And he made millions of fans smile too. Here, check out his incredible story.

Ronaldo de Assis Moreira, often referred to as Ronaldinho or Ronaldinho Gaúcho, is a Brazilian former football player who performed as an attacking midfielder. Known for his dribbling and ability to take free kicks, he is considered one of the best players of all time. Having emerged from the ranks of Brazilian club Gremio, he went on to play for Paris Saint-Germain, FC Barcelona, AC Milan, Flamengo, Atletico Mineiro, Queretaro, and Fluminense.

He also amassed a number of caps with the Brazilian national team, with whom he won one FIFA World Cup. Once a Ballon d’Or winner, Ronaldinho endured hard times to reach the top. He has kept his family close throughout his whole life.

Before he became a worldwide superstar, Ronaldo had to overcome adversity early in his life. Born and raised in one of the most dangerous areas of Porto Alegre, his family would move to a prettier zone of the city when brother Roberto signed for Gremio.

Unfortunately, their new home would also bring one of the most tragic moments in his life. When Ronaldo was only eight, his father João died after hitting his head and drowning in the swimming pool. Roberto, nine years older than Ronaldo but still a teenager, quit his soccer aspirations to take care of his family.

From Futsal to the Field

That enabled his younger brother to find his way in soccer. As he was usually the smallest and youngest player wherever he played, he earned the nickname ‘Ronaldinho’. Having played futsal and beach soccer as a child, he would later take his signature moves to organized soccer.

Early Years and Start of Career of Ronaldinho

Just like his older brother Roberto, Ronaldinho signed his first contract with Gremio and it didn’t take long for him to make his senior debut. At only 17, he was sent to the field in a 1998 Copa Libertadores game. He had a breakout season the following year, recording 58 goals and 20 assists in 121 games, which caught the eye of European giants.

Arsenal was close to acquiring the Brazilian wunderkind, but the deal fell apart due to a paperwork problem. By then, Ronaldinho didn’t have enough international caps to get the work permit a non-EU player needed. His first big break was just around the corner, though, as Paris Saint-Germain was able to sign him.

PSG was the first European club to give a chance to the rising Brazilian midfielder. Ronaldinho signed a five year contract with the French club, who forked out €5 million to acquire his services. Though he posted great numbers in his first year in France, recording 13 goals and 7 assists in 40 appearances, the then PSG coach Luis Fernandez complained about Ronaldinho’s lack of commitment.

Even so, Dinho was given the No. 10 shirt the following season. His production was similar to the previous year, only this time he helped Paris reach the Coupe de France final. However, his performances were not enough to secure the trophy and the team failed to qualify for a European tournament, which is why he wanted out.

FC Barcelona outbid Manchester United to land Ronaldinho for €32.25 million. Signing a five-year contract with the Spanish giants turned out to be the best decision in Ronaldinho’s career. Having won his first La Liga title and FIFA World Player of the Year award in his second season, it was the 2005-06 campaign that found Ronaldinho in his prime.

That year —in which he recorded a career-best 26 goals— Ronaldinho established himself as the best player of the world. His level was such that Barcelona won La Liga and Champions League, and even Real Madrid fans applauded him during a Clasico. On top of that, Dinho received the 2006 Ballon d’Or and UEFA Club Footballer of the Year after leading Barca to their first UEFA Champions League title in 14 years.

He produced similar numbers next year, but his stint at Barcelona would go on decline. Ronaldinho barely played in an injury-marred final year at the club, who was already witnessing the rise of Lionel Messi. Dinho was understood to have lost the commitment he had the three previous seasons, but left a great memory regardless.

Up next for the Brazilian icon was a move to Italian powerhouse AC Milan, but it was not as successful as his tenure with Barca. After a rather lackluster first season with the Rossoneri, Dinho got back to his best in the 2009-10 season, being the top assist provider in the Serie A. He would leave the club halfway through the following season, in which Milan ended up winning the title.

At 31, Ronaldinho’s time in Europe would come to an end. With the 2014 World Cup on the horizon, Dinho returned to Brazil aiming to get enough playing time to be part of the national team.

Instead of reuniting with his old club Gremio, Ronaldinho ended up signing with Flamengo. While he had a fantastic start there, winning the Campeonato Carioca in his first year at the club, he ended up rescinding his contract alleging a four-month debt.

Ronaldinho’s next landing spot was Atlético Mineiro, whom he joined in a six-month deal. With the number 10 shirt already taken, he chose jersey No. 49 in honor of his mother’s birth year. After an impressive 2012 Brasileirao campaign that saw him win the Player of the Year award, he led the club to its first Copa Libertadores title in 2013.

Mineiro was later upset by Raja Casablanca in the 2013 FIFA Club World Cup semifinals, but Ronaldinho still earned a contract extension. It didn’t last long, however, as he left in July 2014 after winning the Recopa Sudamericana.

At 34, he made a shocking move to Liga MX side Querétaro. Ronaldinho felt the love of Mexican people, which made him enjoy his stint in the country. In addition to receiving affection off the pitch, he guided his team to the playoff finals in 2015.

Ronaldinho went back to his home country in July 2015 to play for Fluminense. Only two months later, however, his contract was terminated by mutual consent. Sporting director Mario Bittencourt said Dinho himself admitted he didn’t feel able to perform the way he wanted.

Rise to the International Stage

Ronaldinho also struggled to be consistent at the international level. Having played his first youth international game at 15 in 1995, his first success came with the U-17 team in the 1997 World Championship held in Egypt. He was called up to the senior squad for the first time on June 26, 1999, later winning the Copa America that same year.

Ronaldinho continued to make progress with the national team by taking the spotlight in the 1999 FIFA Confederations Cup, being the tournament’s top scorer. The following year, he led the U23s to the 2000 Olympic Games scoring nine goals in seven games during the Pre Olympic competition. Brazil failed to get past the quarter-finals in Sydney, but glory days were just around the corner.

Forming a mighty offensive trio with world-class striker Ronaldo and superstar Rivaldo, Ronaldinho enjoyed a memorable run in the Korea-Japan 2002 World Cup, in which he was a key contributor to Brazil’s success. When his side was trailing to England in the quarter-finals, Dinho had a hand in two goals to turn things around. He also saw the red card that day, but it didn’t matter much in the end.

Though he shone in another Confederations Cup in 2005, Ronaldinho would never be his true self with the national team again. Despite the hype around him and Brazil’s Joga Bonito style promoted by Nike ahead of the 2006 World Cup, Dinho’s performance in Germany left a lot to be desired. Brazil lost to France in the quarterfinals, and nothing would be the same for Ronaldinho since then.

After captaining the Olympic team that won the bronze medal in Beijing 2008, Ronaldinho was snubbed in the next two FIFA World Cups before retiring from soccer. Overall, it was a great international career regardless, with 33 goals in 97 caps.

Why Did Ronaldinho Stop Playing Soccer?

After playing futsal in India for a few years, Ronaldinho announced he was hanging up his boots on January 16, 2018, through his brother and agent Roberto. At nearly 38, he didn’t feel like he had anything more left in the tank.

How Many Awards Did Ronaldinho Win?

Ronaldinho can show off one of the most decorated résumés anyone can imagine. He succeeded with his national team, he also tasted glory at the club level, and his fantastic performances also earned him prestigious individual accolades.

Though Brazil has produced countless talents, including one of the most legendary players in Pelé, Ronaldinho became arguably the most beloved Brazilian player of all time. It was not only his magic on the pitch, but also his personality (he once got his Coca Cola deal rescinded for showing up at a press conference with a can of Pepsi) and a way of making people smile.

Find out more about Ronaldinho and watch the best sports news in The Highlights App. Sign up for the waiting list to be the first to know when the app is available.

#
SOCCER
The Best 10 Goals Ever Scored in Soccer
Which is the greatest soccer goal of all time? Below are some of the most beautiful soccer goals ever scored, here is a list of the top 10.

#
SOCCER
The Top 10 Best Soccer Teams of All Time
Football has over 100 years of history, yet only a few teams have cemented a legacy. Which are the greatest football teams of all time? Here, take a look.

#
SOCCER
N’Golo Kanté Biography: Personal Life, Career and Achievements
One of the best midfielders on Earth, N’Golo Kante is one of those football players who can take pride in their road to stardom. Here, look at the story of the French superstar.

#
SOCCER
Paul Pogba Biography: Childhood, Career and Achievements
Behind every soccer player there’s a tale of self-improvement and overcoming adversity. Here, we take a look at the story of Paul Pogba, one of the greatest midfielders on the planet.

#
SOCCER
David Beckham Biography: Personal Life, Career and Achievements
One of the most renowned persons on the planet, David Beckham won worldwide recognition not only for his work on the soccer field, but also for his life off it. Here, take a look at the story behind the celebrity.